Boones Ferry – Mr. Boone (grandson of the well-known fronteirsman Daniel Boone, first operated this ferry which crossed the Willamette River for 107 years, carrying thousands of horses, buggies, automobiles and people. There is a small park where the ferry once crossed. Nearby, on the eastern Wilsonville City limits, you can still cross the river by ferry between Canby and Wilsonville on the Canby Ferry.

The Roads to Wilsonville – Boones Ferry Road was blazed by Jesse Boone to bring business to his ferry operation. Wilsonville Road, originally called Market Road, was the main route from farm to market.

Boone’s Landing – Alphonso Boone settled here in 1846 and a thriving community sprang up along the north shore of the Willamette River. The settlement was the genesis of Wilsonville.

Tauchman House – Overlooks the site of the Boones Ferry operation. It was the residence of ferry operator Emil Tauchman for 30 years.

Boones Ferry Landing – In its heyday, there were as many as 300 river crossings a day. Ferry service was discontinued when the freeway and bridge were completed in 1954.

Oregon Korean War Memorial – The 94 foot Wall of Honor memorializes the names of 287 Oregonians killed during the Korean War (1950-53). Upon its dedication in 2000, the state memorial became the 23rd of its kind in the U.S.

Stein-Boosier Barn – Restored barn originally built at the turn of the 20th Century.

Pioneer Cemeteries – Meridian Cemetery (65th off Stafford Rd.), Robert Bird Cemetery (Gage and Newland Roads) and Pleasant Hill Cemetery (SW 145th and SW Westfall Rd.). Monuments in these pioneer cemeteries date from 1851. Many of the inscriptions are in German.

Canby Ferry – One of only three operating ferries on the Willamette River and in operation since 1914.

The Old Aurora Colony Museum – 15018 Second Street NE (Corner of Second & Liberty Streets) Aurora, Oregon 97002. Museum exhibits focus on Colony families, crafts and history. Tours are offered of the buildings that house the collections of artifacts that have been passed down over the generations. Throughout the year there are several special events that feature quilts, craft demonstrations and hands-on activities for adults and children. 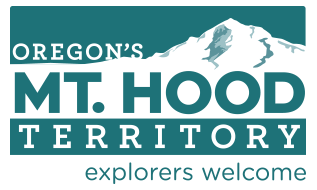